Brakes convert kinetic energy of motion into friction to slow your vehicle to a stop. More clearly, the mechanical movement of your brake pedal transfers fluid from the hydraulic brake master cylinder to the calipers or brake cylinders at each wheel end to apply friction and slow the turning wheels.

The master cylinder itself may be constructed from either cast iron or aluminum. A master cylinder can have multiple configurations but generally has two top ports where the brake fluid enter from the reservoir. There are two outlet ports on the side: the reason they are 2 is to isolate the system in the event one system let’s go. In this event, the driver would retain the other system to slow him down. Don’t get fooled, when a brake line lets go, the vehicle braking capacity is reduced by 70%

The brake pedal uses leverage to apply a strong mechanical force to the brake master cylinder piston. This is the first mechanical advantage in the brake system. The goal is to build tremendous pressure at the brake calipers or wheel cylinders without requiring too much legwork. A vacuum assist (sometimes hydraulic) booster is typically used to further multiply the force available using engine vacuum as an assisting force.

Drum brakes are fast disappearing from new vehicles, but many older vehicles had drums on the rear and sometimes on the front. A drum brake system consists of four major components on the axle: the supporting backing plate, hydraulic wheel cylinder, brake shoes, and the brake drum itself. 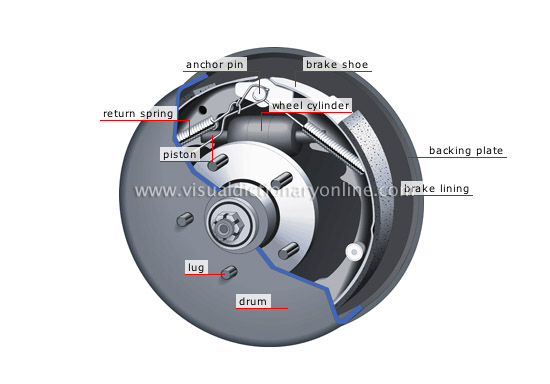 Disc brakes do not retain water as do drum brakes, and dry much quicker. Fine gravel and sand can also get stuck inside drums and wreak havoc on the brake shoes.

Aside from leaking wheel cylinders, drum brake performance can suffer from worn shoes or drums that have been worn to an out-of-spec inside diameter. Chattering or surging may be due to drums that are old and have been worn out-of-round. Sticking or dragging rear brakes, or brakes that seem to get excessively hot may suffer from sticky wheel cylinders or broken/damaged retracting springs. Modern drum brakes are self-adjusting through a star-wheel screw mechanism at one end of the brake shoes. However, over time, the mechanism may start to stick and cease its adjustment function.

Disc brakes were first tried on vehicles over 100 years ago with limited success, then started to appear on post-WWII cars as a result of designs that were used on airplanes. Discs then replaced many front drum brakes in the ‘70s, and in the last decade or so discs have become common on rear axles.

In contrast, a floating caliper has a single large piston (or two smaller ones) located on the inboard side of the caliper. Since force must be applied equally to both sides of the rotor, the floating caliper must be able to actuate both pads. The caliper is bolted to the mount with special pins, and the caliper slides back and forth on sleeves or bushings. The inboard pad sits directly on the piston. The outboard pad sits within the caliper frame. When the brakes are applied, the piston moves outward pushing the inboard pad into the rotor. Simultaneously, the force exerted backward from the piston onto the caliper frame causes the frame to move inboard, bringing the outboard pad into contact with the rotor. In this way, both pads press on the rotor.

A sliding caliper operates in much the same way as a floating caliper. Instead of using a set of pins, a sliding caliper rides in a set of machined guides. The guides allow for the lateral movement of the caliper.

Disc Brake Troubleshooting – Leave it to us

Disc brake calipers can leak which would require replacement. Once upon a time, you could rebuilt calipers however it has become more cost effective to simply replace them. Another failure of disc calipers occurs when a sticking caliper piston does not retract a bit once the brake pedal is released. This leaves one or both pads in contact with the rotor where they continue to drag on the rotor. This results in excessive rotor heat and premature pad wear. Uneven pad wear may also be the result of a caliper that is not floating freely on its pins or slides. When this occurs, most of the braking force is coming from just the piston side of the caliper. The other pad is doing little work, and braking performance suffers. Cleaning and lubricating the pins or slides should cure the problem. Uneven pad wear on a fixed caliper could also signal that a piston is sticking in its bore.

Read What Our Customers Have to Say
Customer Testimonials

Need to get in touch?
Contact Us
Our Locations

Orleans Autopro is independently owned and operated. Located at 2193 St-Joseph Blvd in Orléans. We are a Full service car and light truck repair and maintenance center. Whether you are looking for brakes, suspension work. tires, and maintenance service including oil change, preventative maintenance, or a major repair, we will take care of all your needs.
Copyright © 2020 MyAutoPro.ca
Back To Top